Since the 1970s, the U.S. economy has undergone a significant shift away from manufacturing and toward service industries. North Carolina has not escaped this larger trend, as production of its two signature products – furniture and textiles – has relocated to foreign counties, most notably China and Mexico.

In this post, we’ll examine one negative aspect of economic restructuring on North Carolina: loss of manufacturing jobs. The offshoring of the state’s furniture and textiles industries has negatively impacted many of the state’s counties, especially those between Charlotte and Greensboro.

To be blunt, the change in North Carolina’s manufacturing sector has been significant, although it resembles shifts occurring elsewhere in the country. The state has lost 44% of its private-sector* manufacturing jobs since 1990, with some counties losing over 75%. Only four have gained manufacturing jobs within that time frame, and only one of these – Bladen, just outside of Fayetteville – has gained an appreciable number. 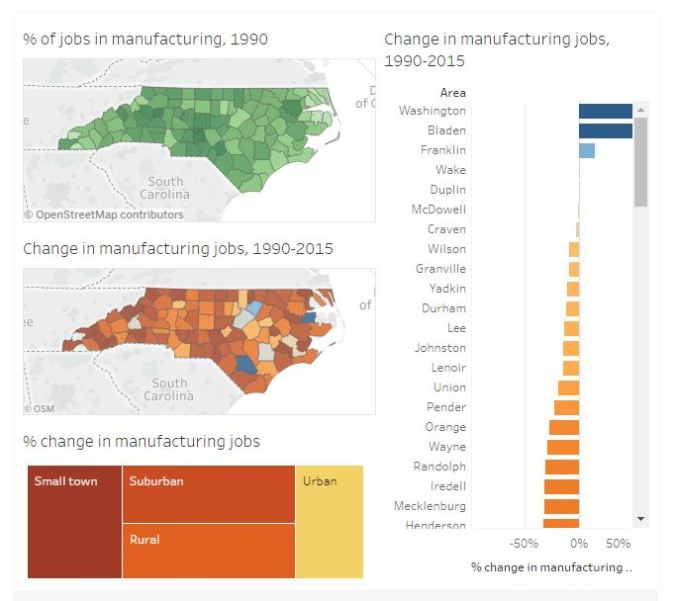 END_OF_DOCUMENT_TOKEN_TO_BE_REPLACED

Many know that North Carolina is one of the fastest-growing states. It has added nearly 750,000 private-sector jobs since 1990, and its population recently eclipsed the 10 million mark. This job growth hasn’t touched all parts of the state, though: half of it has occurred in only two counties, and over one-third of the state’s counties have actually lost jobs over the past 25 years.

In the next series of posts, U2P0 will examine how the geography of jobs across the state has shifted since 1990, both overall and for specific industries.

Between 1990 and 2015, North Carolina’s population increased by nearly 3.5 million – a 52% gain – and the state added 766,992 private-sector jobs, which represents an increase of 29% over 1990 figures. Due to the state’s growing economy, Raleigh was recently ranked as the number one city for jobs by CNN.

Despite this strong job growth, 38 of the state’s 100 counties have fewer private-sector jobs in 2015 than they did in 1990. Twenty-six of those counties – over two-thirds of them – are either small towns or rural in character, and many are in the western and northeastern parts of the state. Much of these job losses have occurred as agricultural and textile industries have either shrunk or moved offshore.

END_OF_DOCUMENT_TOKEN_TO_BE_REPLACED

Over the last twenty-five years, North Carolina has been one of the fastest-growing states in the country. The state’s economy has diversified beyond agriculture and manufacturing to become dominant in both finance and technology. The state has also attracted retirees drawn to its high-class medical facilities, especially in the Research Triangle area around Raleigh and Durham.

This economic transformation has not benefited the entire state, however. Small towns and rural areas – many reliant on tobacco farming and textile manufacturing – have lost both population and jobs as their economic prospects have dimmed. Some of these counties, though, have reinvented themselves as tourism hubs – particularly in the western part of the state.

In the next series of posts, U2P0 will examine the changing geography of jobs in North Carolina from 1990 to 2015. Using data from the Bureau of Labor Statistics, we’ll report private-sector job changes both overall and within certain industries. The first post will examine total job changes from 1990 through 2015, and our attention will then turn to manufacturing, technology, finance, and tourism.

We’ve termed the series “A Tale of Two States” to reflect the highly-divergent economic trajectories of the state’s counties. Over half of the state’s private-sector job growth has occurred in two counties: Mecklenburg (Charlotte) and Wake (Raleigh). Outside of those places, counties have either gained a more modest number of employment opportunities or struggled with job loss.