Vietnam is undergoing a transition from a rural, agricultural society to an urban, industrialized one. We’ve already seen transitions like this in East Asia – first in Japan, then in South Korea and Taiwan, and most recently in China. 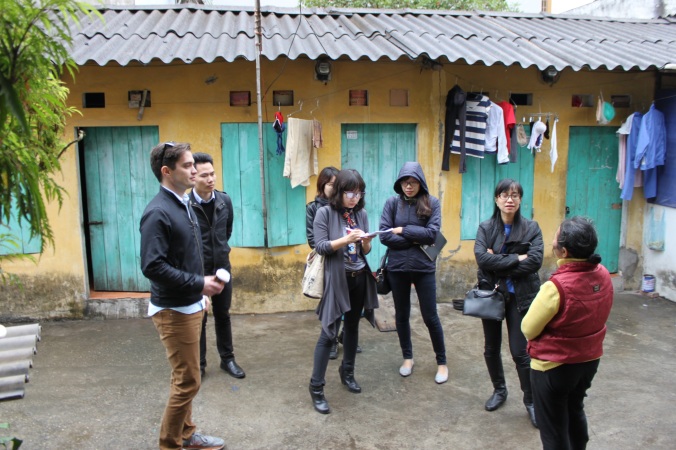 Dr. Michael Webb, and Vietnamese scholars touring privately-owned apartments that are leased to factory workers. The owner (in the red vest) was displaced from her farm when the industrial zone was built. She and her husband built the apartments to rent to the factory workers.

Vietnam’s economic and social transformation since the U.S. normalized relations between 1995 and 2000 has been significant. Since 2000, the county’s GDP has increased 481%, from $34 billion to $195 billion. Per capita income has increased from $400 per year to $1,990, nearly quintupling, in the same period. The percent of Vietnam’s residents living in cities – a fairly good indicator of industrialization – has risen from 24% in 2000 to 34% today.* This urbanization figure is still below other counties in East Asia, though – China’s population is 56% urban and South Korea’s is 61% urban.

As Vietnam industrializes and urbanizes, the country is struggling to provide housing to people migrating to its industrial zones from rural parts of the country. While Vietnam has succeeded in attracting foreign-owned factories, its government has not provided sufficient housing for the workers. In fact, a recent study found that, of the 2.8 million workers in Vietnam’s industrial zones, 1.7 million are in need of housing. 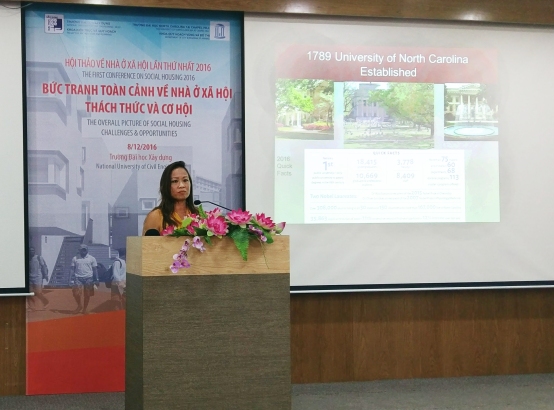 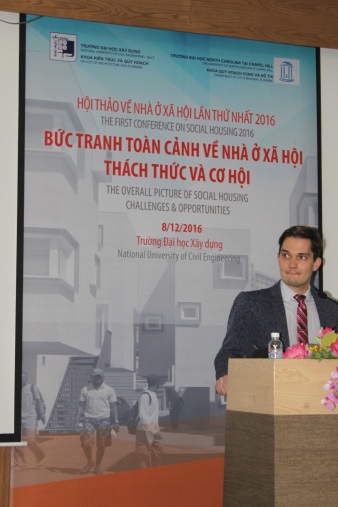 To begin addressing Vietnam’s social housing issues, the National University of Civil Engineering (NUCE) hosted a conference on social housing, titled “The Overall Picture of Social Housing – Challenges and Opportunities,” in December, 2016. Presenters included academics from NUCE, representatives from the Vietnam National Real Estate Association, and the Vietnam National Construction Association. In addition, Dr. Mai Nguyen – who is a professor in UNC’s Department of City and Regional Planning and a CURS Faculty Fellow – and I presented on our research in public housing in the U.S.

What emerged from the conference is the need for collaboration between researchers in the U.S. and Vietnam to solve housing issues for low-income families. As mentioned earlier, affordable housing is in short supply near the industrial zones.

There are two types of social housing at Thanh Long: dorm-style units (with some floors reserved for men and others reserved for women) and high-rises with traditional apartments. The dorms are more targeted to single men and women, while the apartments are mainly for families (and are much more expensive).

In addition, Canon – the Japanese camera-maker that is also a major employer in the industrial zone – has rented out some of the social housing. The housing is very inexpensive, and Canon provides a daycare facility, kindergarten, and evening Japanese and English language classes. 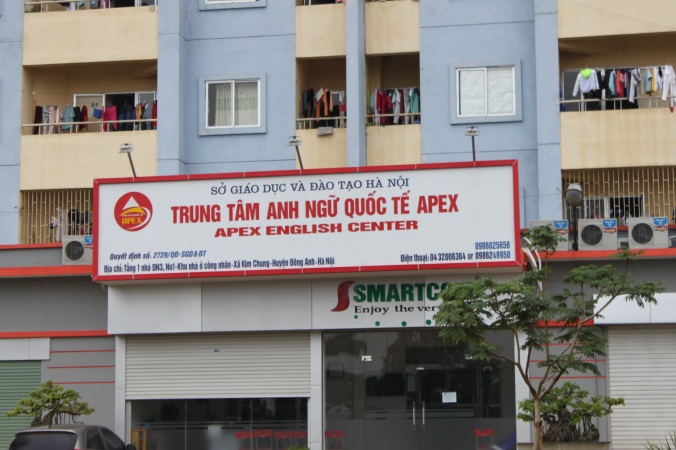 Many companies that lease social housing to their workers also offer services like daycare and English or Japanese language courses.

There are two villages near the industrial zone, and many of the workers live in private apartments there. We spoke with a landlord who was displaced from her farm when the Vietnamese government cleared land for the industrial zone. She and her husband purchased a storefront in the village and currently operate it as a small shop. 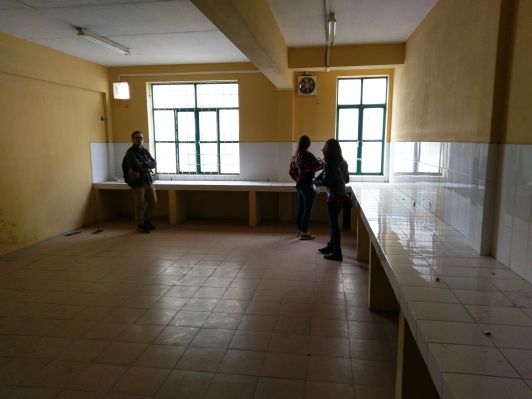 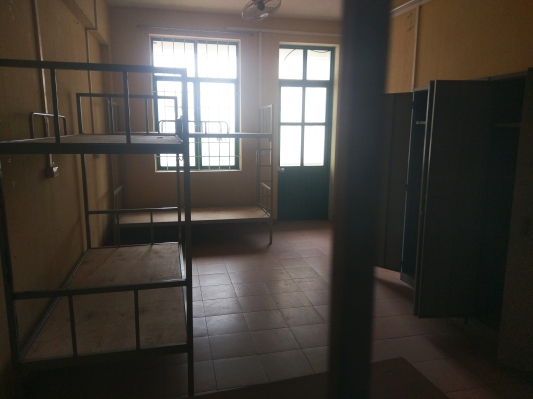 Behind the store, they built around 12 apartments, each about 15 feet square. The tenants share a common bathroom and kitchen; individual apartments don’t have a faucet and each has a single electrical outlet. Other apartments in the village are similar:  between 15-20 feet square, a few electrical outlets, and possibly running water. Most households are either a single person or a couple; if they had kids, most had sent them to their home village to live with extended family.

There are many similarities between social housing in Vietnam and public housing in the U.S.  Both counties face acute shortages: only 40% of workers in Vietnam’s industrial zones have social housing, while in the U.S., public housing only serves about 25% of those in need. In response, low-income residents in both countries must rely on the private market for housing.

In 2017 and beyond, researchers at NUCE and UNC will collaborate to better understand Vietnam’s social housing issues and develop policy solutions. Our partners in Vietnam are currently testing a survey of workers in the industrial zones outside Hanoi to understand their current housing situation, and how it can be improved. We’ll use the results of the survey to craft policy recommendations for the Vietnamese government to identify ways to finance and build social housing.

A recent article in the New York Times asks whether “North Carolina is the future of U.S. politics.” The article describes the state’s contentious political battles – most notably on House Bill 2, otherwise known as the ‘bathroom bill.’

One explanation given for the state’s political divide is a topic we’ve recently covered here at Urban2Point0: the concept of ‘two North Carolinas’ (we’ve called it ‘a Tale of Two States’). The author argues that:

The State’s metropolitan areas continue to prosper, with an influx of white-collar workers drawn to their thriving finance and technology sectors. But in North Carolina’s rural communities, the tobacco, textile, and manufacturing industries have collapsed, with little taking their place.

These economic disparities – and their relationship with areas either economically growing (where residents are more liberal) or shrinking (conservative) – exacerbate North Carolina’s partisan divides. The article quotes a state senator from rural North Carolina as upset about announcements of firms moving to Raleigh or Charlotte, arguing that “it’s like fish in a barrel.” He worries that efforts to attract firms and residents to cities will result in North Carolina losing what he feels are its traditional roots.

In this post, we’ll provide additional context to the New York Times story using data from the A Tale of Two States series. As in our previous posts, we’ll examine changes in private-sector employment between 1990 and 2015. (If you’re interested in probing these issues deeper, we recommend reading our previous posts on the subject.)

The U.S. has seen its economy shift from manufacturing to the service sector since the 1970s. North Carolina is no exception to this trend. Between 1990 and 2015, the state’s fastest-growing industries were professional services, education and health care, and hospitality. In fact, the service sector comprises the top six fastest-growing industries in the state, and seven of the top eight. 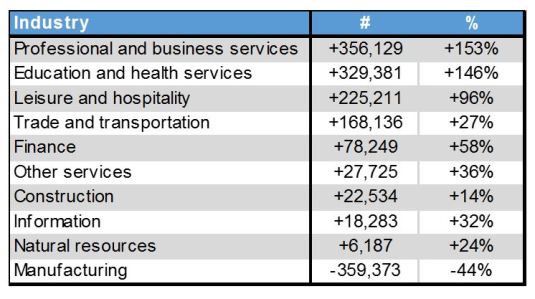 One finding from A Tale of Two States is that growth of service-sector jobs across North Carolina has been strikingly uneven. Urban counties have gained hundreds of thousands of jobs while non-metro counties – including small towns and rural areas – have only gained a small number or even lost jobs. Between 1990 and 2015, metro counties added nearly 739,000 jobs, while rural and small town counties lost over 6,000 jobs. 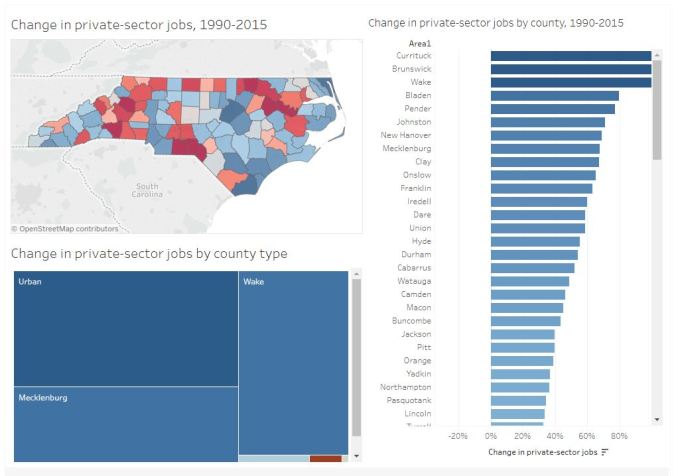 This disparity between metro and non-metro counties is evident when we examine job growth in the service sector, which has accounted for nearly all of the state’s new jobs. Counties in metro areas are classified as either urban or suburban and are in shades of blue in the figure below. Non-metro counties are either classified as rural or small towns and are in shades of orange. We’ve separated Mecklenburg and Wake Counties because they account for so much job growth. 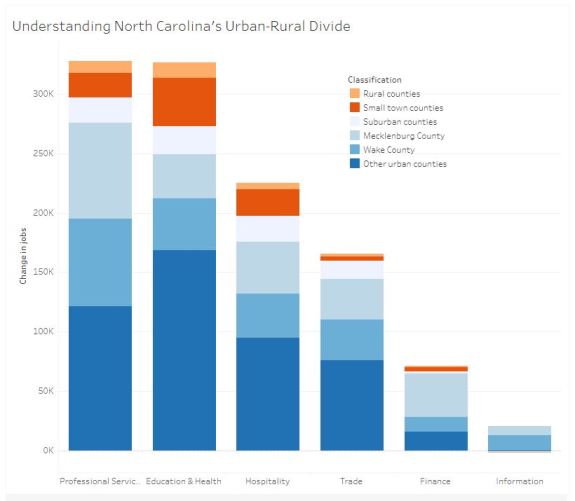 For nearly all service industries, metro counties have accounted for at least 90% of private-sector job growth. In fact, for each industry, at least half of all job growth has occurred in just two counties: Mecklenburg (Charlotte) and Wake (Raleigh). Given that these two counties only account for 10% of the North Carolina’s population, one can see how service jobs have disproportionately clustered in these areas. 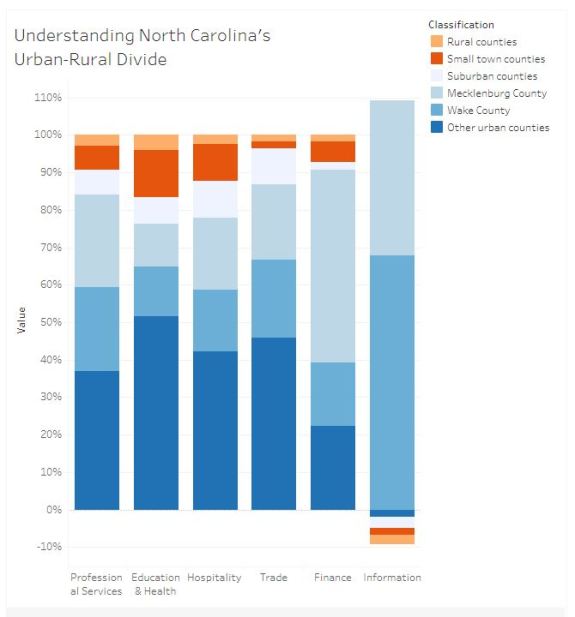 Even more worrisome for non-metro counties: for the highest-paying industries in the service sector, job growth is even more concentrated in metro areas. For example:

In comparison, the two service-sector industries where non-metro counties have done slightly better – education and health care in addition to hospitality – have annual average salaries of $44,753 and $18,236, respectively.

North Carolina’s experience of urban growth and rural decline is not unique: across the U.S. and industrialized world, service-sector jobs are concentrating in cities and metro areas.* Scholars have proposed several reasons for why this is occurring. These include:

The New York Times article quotes State Senator Ralph Hise as arguing that “it’s really going to take workforce development and recruiting and economic incentives … to tag those industries that can come into this state and serve in one of the rural areas.” Some Southern states – notably South Carolina (Boeing and BMW) and Alabama (Airbus and Mercedes-Benz) have attracted manufacturing with incentives.

North Carolina may consider incentivizing other industries for non-metro counties. The state has already enjoyed some success attracting logistics firms, which can then help attract manufacturing and warehousing businesses. Any efforts to attract jobs to rural areas, however, shouldn’t be at the expense of efforts to attract service-sector industries to urban areas. Ultimately, an approach that leverages North Carolina’s strengths in finance and technology, and its emerging logistics sector, may be the best path for economic vitality in all parts of the state.

* A very quick calculation shows that approximately 93% of all private-sector job growth between 1990-2015 occurred in metro areas.