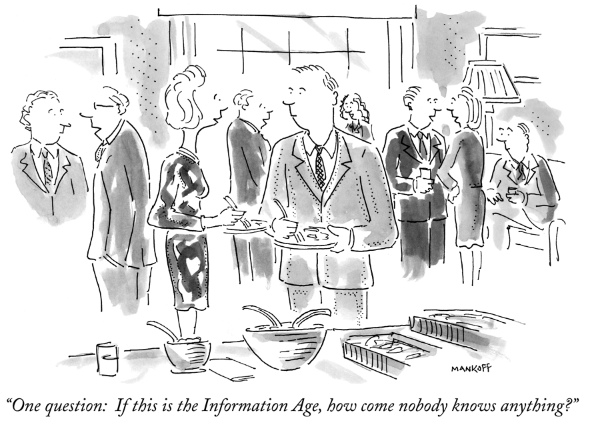 Welcome back to Urban2Point0! After an extended holiday break in a time zone far, far away (post forthcoming), we’re ready to wrap-up our analysis of North Carolina’s job growth.

Our last post showed how, in a period when North Carolina added nearly three-quarters of a million jobs, the state also experienced significant job losses in the manufacturing sector. Small towns and rural counties were hit especially hard by these job losses – in fact, small towns lost nearly half of their manufacturing jobs between 1990 and 2015.

In this post, we’ll shift our attention to white-collar jobs, specifically finance and professional services – which includes management, research, and engineering.* These industries have driven job growth in both North Carolina and the entire U.S. over the past decades. White-collar jobs tend to concentrate in large cities, and North Carolina is no different – with Charlotte serving as a major financial center and Raleigh as a hub of research and technology.

The two white-collar industries that this post examines are finance and what the Bureau of Labor Statistics calls “professional and business services” – more on that below. Not surprisingly, both finance and professional services jobs have increased in North Carolina since 1990. The state has added over 78,000 finance jobs since 1990, more than doubling in that time period. For professional services, North Carolina gained over 350,000 jobs – a greater than 150 percent increase.

There are two ways of looking at the county-level data, and each way tells a different story. When we look at percentage growth over the past 25 years, many counties have experienced very sharp increases in both finance and professional jobs. For instance, Madison County in extreme western North Carolina increased its professional services jobs by 497 percent, while Currituck County (in the state’s northeastern corner) increased its financial services jobs by 680 percent.

When our focus shifts to the number of jobs added, though, the conclusions shift dramatically. Mecklenburg and Wake Counties have added by far the most white-collar jobs, with only small increases in small towns and rural counties. In fact, that 497 percent in Madison County only represents an increase of 497 positions. The 680 percent increase in Currituck County’s finance jobs translates to only 544 actual jobs added. 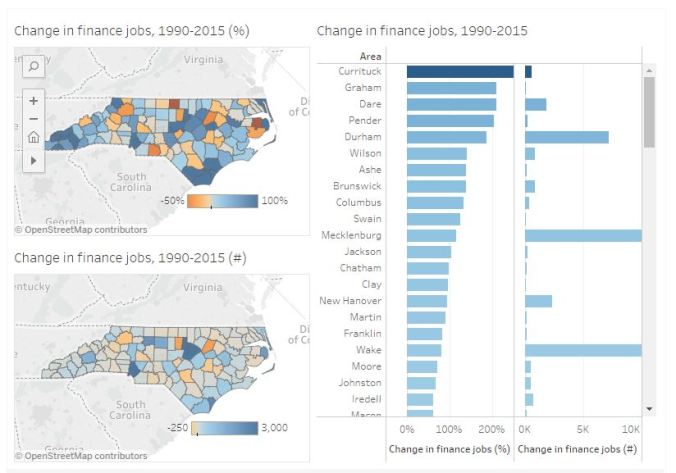 END_OF_DOCUMENT_TOKEN_TO_BE_REPLACED

Many know that North Carolina is one of the fastest-growing states. It has added nearly 750,000 private-sector jobs since 1990, and its population recently eclipsed the 10 million mark. This job growth hasn’t touched all parts of the state, though: half of it has occurred in only two counties, and over one-third of the state’s counties have actually lost jobs over the past 25 years.

In the next series of posts, U2P0 will examine how the geography of jobs across the state has shifted since 1990, both overall and for specific industries.

Between 1990 and 2015, North Carolina’s population increased by nearly 3.5 million – a 52% gain – and the state added 766,992 private-sector jobs, which represents an increase of 29% over 1990 figures. Due to the state’s growing economy, Raleigh was recently ranked as the number one city for jobs by CNN.

Despite this strong job growth, 38 of the state’s 100 counties have fewer private-sector jobs in 2015 than they did in 1990. Twenty-six of those counties – over two-thirds of them – are either small towns or rural in character, and many are in the western and northeastern parts of the state. Much of these job losses have occurred as agricultural and textile industries have either shrunk or moved offshore. 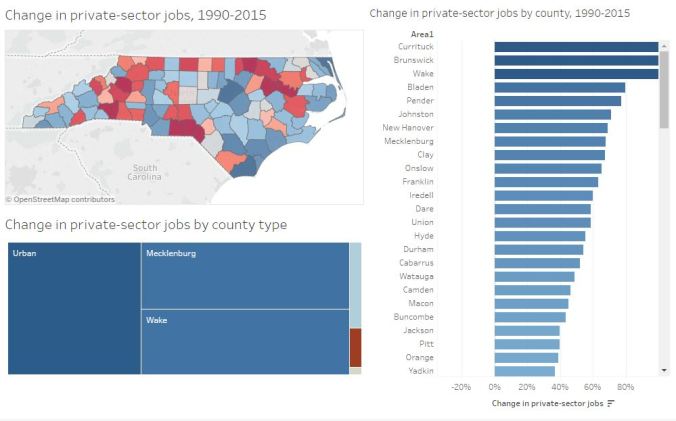 END_OF_DOCUMENT_TOKEN_TO_BE_REPLACED

Like other North Carolina metros – and many cities throughout the Sunbelt – Charlotte is very sprawling.  A recent report ranked the city as the 25th -most sprawling in the country.  However, among metros with a population of over one million, Charlotte ranked 5th in terms of sprawl.* 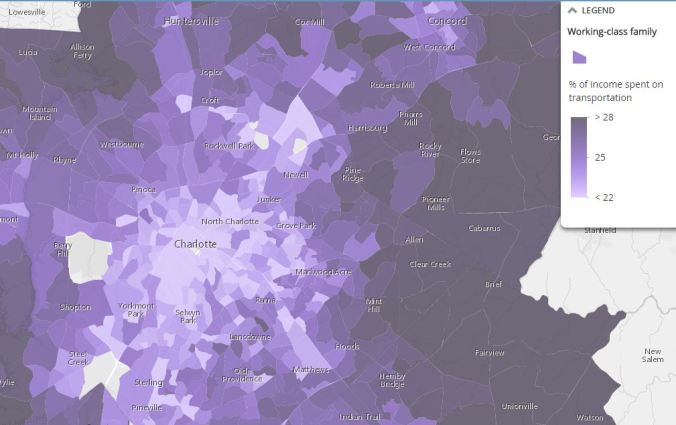 Households devote less of their income to transportation in the denser parts of Charlotte.  Click the map to interact with it.

END_OF_DOCUMENT_TOKEN_TO_BE_REPLACED

As the largest city in North Carolina, the Charlotte metro area stretches across 13 counties in two states. As the metro’s population has grown substantially over the past few decades, so have affordable housing pressures: HUD estimates that Charlotte needs 34,000 affordable housing units to meet demand, and over 32,000 households recently applied for the Charlotte Housing Authority’s Section 8 program. 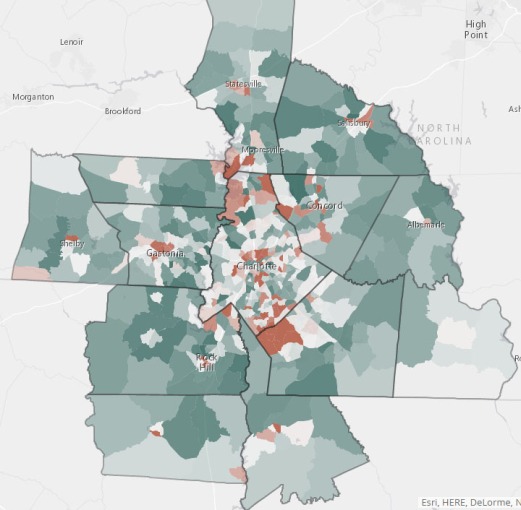